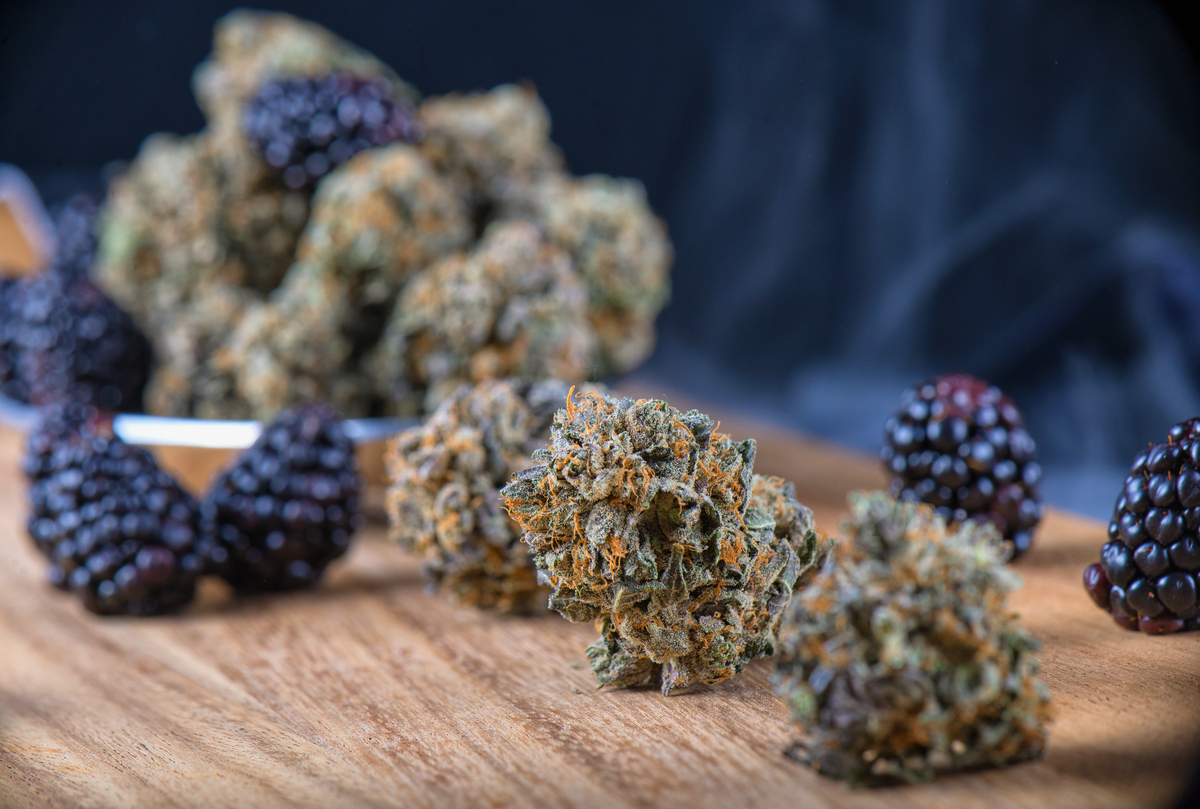 Talk to most experts in the industry these days and they’ll tell you, it’s not just about the THC, but the terpenes.

Terpenes are the naturally occurring compounds in the plant. And, there’s a lot more to terpenes than giving weed its diverse range of smells and flavors.

They’re also responsible for the effects one experiences while high. That’s right! From sleepy to chatty to everything in between, terpenes have a much larger role in a weed high than most stoners are aware. Working together with THC to create what’s commonly referred to as the “entourage effect,” terpenes are the driving reason behind weed’s complex highs. So next time you smoke weed, make sure to thank the terpenes for their awesome (very much appreciated) work.

In 1998, Israeli researchers Raphael Mechoulam and Shimon Ben-Shabat introduced a concept called the entourage effect. In this theory, it is believed that terpenoids work together with cannabinoids to “enhance their natural balancing properties.” This study led to the conclusion that when cannabinoids, like CBD or THC, are isolated and working on their own, they aren’t as effective.

Teamwork, it seems, is the key factor in the entourage effect.

More recently, Dr. Ethan Russo added more evidence to the entourage argument. He demonstrated that terpenoids, when added to THC’s intoxicating properties, can increase the therapeutic effects of THC. This revelation led to further inspiration.

The world of terpenoids is as vast as it is scientific. There are so many interesting details about the basics of terpenoids and how they are essential to the therapeutic applications of marijuana. Strap in, put on your I <3 Terpenoids shirt, and get ready for the chemical thrill of a lifetime.

When faced with the question “What are terpenoids?” there is a straightforward answer, yet, due to its scientific nature, it’s not exactly user-friendly.

According to Wikipedia, terpenoids are “any of a large class of organic compounds including terpenes, diterpenes, and sesquiterpenes. They have unsaturated molecules composed of linked isoprene units, generally having the formula (C5H8) n.”

The answer in relation to marijuana is a lot more detailed.

Back to Basics: What Are Terpenes?

More specific to cannabis, terpenes and terpenoids are the compounds found within the plants that give them their smells and flavors.

Even more simply put, they are found in the essential oils being secreted in the cannabis flower’s resin glands. These oils are extracted through vaporization. These same glands are where other cannabis-specific features, such as CBD and THC, are also produced.

They are responsible for the taste and aromas of ganja.

Terpenes are organic hydrocarbons, and terpenoids, while nearly the same, contain more atoms that have gone through change after the post-drying process of oxidation. Terpenes are wet, while terpenoids are dry. Since they are so similar, the two phrases are typically used interchangeably.

There are close to 200 different terpenoids that have been recognized in cannabis plants, though they exist throughout the vegetation landscape, from flowers and herbs to fruits and plants. The phrase “stop and smell the roses” is quite literally possible thanks to terpenoids.

When you think of a pine tree, what comes to mind?

You can thank pinene for that imagery, the terpenoid responsible for that nature-specific scent. Best of all, according to the United States Food and Drug Administration, terpenoids are found in most human non-cannabis diets already.

Why Should I Care About Terpenoids?

There are two main reasons to care about terpenoids. For the everyday cannabis connoisseur hoping to get the best out of their bud, a knowledge of terpenoids can help in the process of selecting the most pungent and aromatic flowers.

In the medical realm, terpenoids are also known to have an expansive range of therapeutic qualities.

Cannabinoids are vital in the cannabis world because they bind to the brain’s receptors to create stimulation. Terpenoids do the same thing, with slightly different effects.

As previously mentioned, terpenoids are not unique to the cannabis plant. Take a look at the following, which can be found in marijuana’s flower, as well as throughout nature.

Mycrene, usually described as an herbal, earthy, and musky scent, is the most common terpene made by cannabis. High myrcene levels are known to lead to severe lethargy, couch locking users after a dose of indica flowers. Some varieties of the plant even contain up to 60% of this essential oil, which might be why so many people associate cannabis with sleepy or laziness.

Shout out to pinene (?-pinene), previously mentioned as the reason for the fresh pine-smelling scents. Pinene, as its name suggests, offers a pine and fir scent. It is commonly found throughout nature in both conifer and non-coniferous plants, including pine woods, citrus fruits, and balsamic resin.

Welcome to the world of citrus. Limonene is one of two major compounds formed from pinene and smells similar to oranges, limes, and lemons. The effects are pleasant and often result in mood and attitude uplift. This terpenoid is quick-acting and appears in the bloodstream soon after inhalation.

This mouthful is found within basils, cloves, peppers, lavender, and cinnamon leaves, and is often described as spicy and peppery. This is the only terpenoid known to directly interact with the endocannabinoid system (CB2) and it acts as a non-psychoactive agent. Caryophyllene is commonly found in chewing gum.

Best known for its floral and lavender-esque odor, linalool is also found in a variety of plants, including birch, rosewood, citrus, and coriander. It’s also really, really common in everyday products; you can thank this terpenoid for that lavendery bath bomb featured on your Instagram story.

Humulene emits a hoppy smell, often found in sativa strains, hops, and Vietnamese coriander. This terpenoid has been featured in traditional Chinese medicines for years, and for good reason.

When cannabis smells sweet, akin to roses, geraniol is the terpenoid responsible. Also, very popular in bath and body products, geraniol has a calming aroma and is a surprising mosquito repellant.

Terpinolene joins the ranks as a common terpenoid found both in cannabis and in bath and body products, specifically perfumes and soaps. It comes with a pine-like smell with floral accents, offering a sweet flavor for users.

Phellandrene has been used since it was first discovered in the eucalyptus plant. It’s absorbed through the skin, making for a popular perfume choice.

It can also be argued that while THC is well-known and a common concept throughout the cannabis community, terpenoids are their under-studied counterpoints. It’s because of this lack of research that it’s difficult to predict exactly how free-standing terpenoids (rather than grouped in a THC entourage) in cannabis can be used. More research is needed to increase medical accuracy.

Hopefully, the vast world of terpenoids has been broken down into easy-to-understand sections. Understanding terpenoids and their function within both the cannabis plant and throughout nature can be helpful to weed-lovers and curious minds alike, with hefty medical benefits on the horizon.