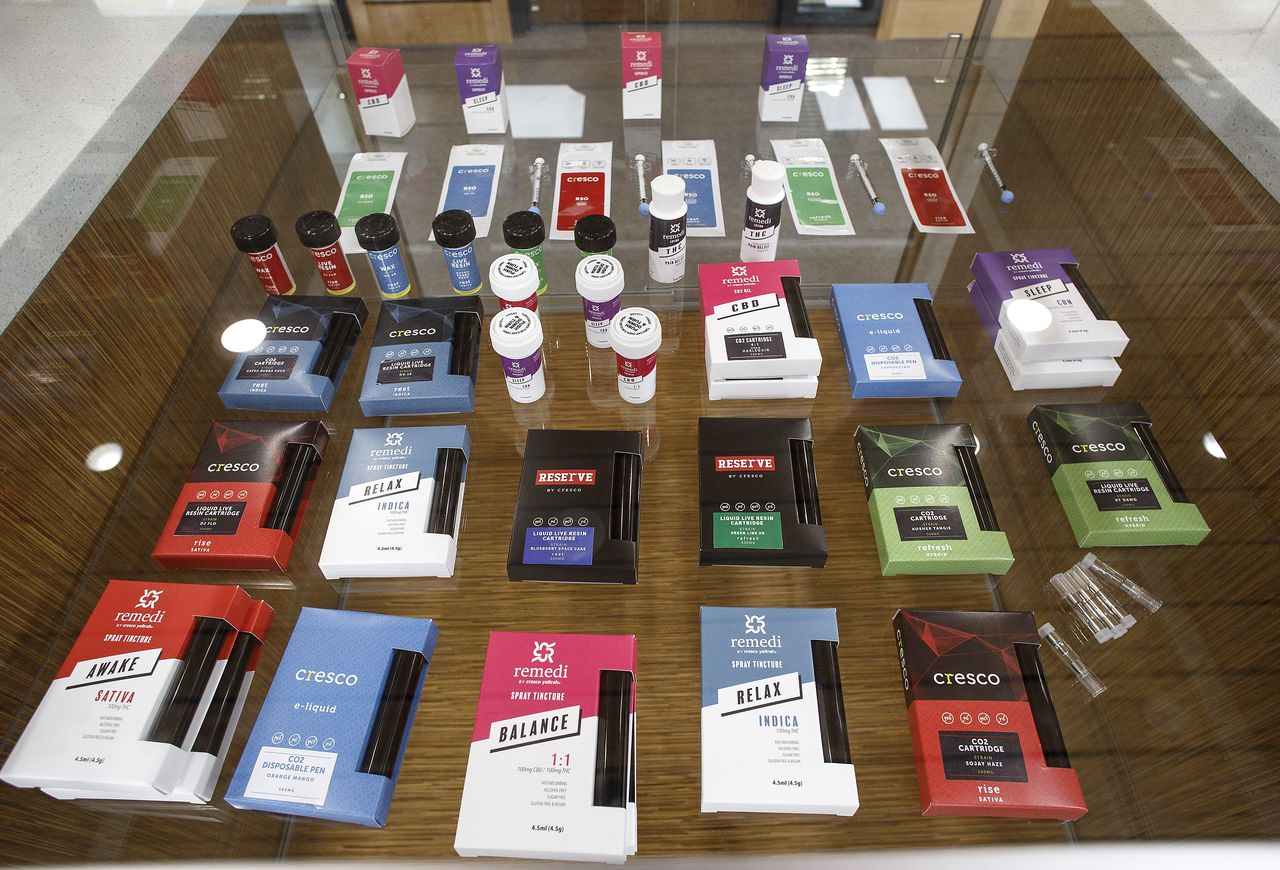 Story by Sam Wood of The Philadelphia Inquirer

“I’m a 50-year-old Black man who’s been a civil rights worker,” said Cobb, now a criminal-justice activist in Philadelphia. “I smoke to have my brain slow down. But to be honest, I also smoke because I enjoy it.”

Alleviating his physical and mental pain is difficult when he feels another sting: His doctor-recommended medicine is not covered by insurance. He pays out of pocket — as much as $120 a week.

Other marijuana users in Pennsylvania agree.

Surveys show that the Keystone State has some of the highest prices for medical marijuana in the nation.

Cannabis is most often sold in eighths of an ounce, which can be rolled into about seven joints. An eighth of Gorilla Glue 4 marijuana sells for $35 in California. It’s $40 in Maine. It costs $58 in Pennsylvania.

In Colorado, a full ounce of average weed often sells to consumers for $190. In Pennsylvania, the price is closer to $500. Some especially rapacious growers charge $600.

“The patient community is always outraged about the prices,” said Luke Shultz, a member of the state’s medical marijuana advisory board. “I’m not sure where the price should be. But we’d sure like to see it lower.”

Why is this legal weed so expensive? Blame it on many unexpected factors that have plagued the 21/2-year-old medical-marijuana program. They range from old-fashioned profiteering to a state law that has kept supply to a minimum, from a host of expensive regulations to an embryonic agency timid about using its legal authority to drive down prices.

That said, key state officials aren’t even willing to talk about the issue. A spokesperson for the Office of Medical Marijuana said its director, John Collins, paid $133,000 a year, would not grant an interview.

In written replies to questions, the agency said only, “We continue to work to assist patients to ensure we have access to medical marijuana.” It provided no details.

The state’s new medical-marijuana law permits the agency to cap prices and set up a fund to help defray costs for the poor. But such steps may not be taken for years, if at all.

Agency staff said the law blocks it from tackling prices until it has first adopted final regulations and paid back the state $3 million in seed money. And officials say it won’t meet those conditions until late 2022, at the earliest.

The agency also disclosed to The Philadelphia Inquirer that $20 million in early marijuana revenue had been transferred to the state’s general fund in recent months, to help make up for pandemic-related shortfalls. That siphoned off millions that could have assisted lower-income customers.

Drawing upon analyst reports, national data and interviews with experts and industry executives, here is an examination of prices in a new marketplace that the state has turned into what economists term an oligopoly — a sector dominated by a small group of powerful players watched by a handful of impotent regulators.

Cannabis growers and dispensary owners charge what they want. Patient counts have exploded during two years of the medical marijuana program, paced by the addition of “pain” and “anxiety” as qualifying conditions. There are constant shortages — even as COVID has increased demand far more.

Growers in Western states and Maine may cultivate cannabis outside. That’s why customers can buy marijuana there at rock-bottom rates. The benefit of indoor growing is consistent quality and purity. Growers have greater control over the crop indoors. In a warehouse, growers can turn over more than five harvests a year. But it all comes at a cost.

“Replicating the sun is a very expensive proposition,” said David Tuttleman, the operator of an indoor-grow facility near Las Vegas

In fact, growing under lights and carefully calibrated conditions doubles the cost of producing marijuana, Tuttleman said. In Colorado, for instance, retailers in November paid $970 wholesale for a pound of outdoor weed, according to Cannabis Benchmarks, a trade publication. In Pennsylvania, an indoor pound sold for at least $3,500 and as much as $4,160.

And dispensaries, like retailers of many products, mark up the wholesale product 100%.

Regulations unique to Pennsylvania drive up the price

Owners of weed businesses grumble about having to comply with Pennsylvania requirements nonexistent in other states.

Pennsylvania demands that producers test their cannabis for molds and other impurities not once, but twice — at harvest and again when the crop is packaged. Few other states impose a second test.

Moreover, Pennsylvania is the only state to require producers to destroy crops if they fail the second test, executives say.

Unlike in other states, Pennsylvania producers can’t legally “remediate” crops found to have trace amounts of mold. Industry practice elsewhere calls for growers to reprocess a slightly tainted batch into oils or concentrates. Pressure and heat from the process kill any foreign substance.

“Remediation is a big issue in Pennsylvania,” said a grower who likes others fears retribution from state regulators. . “I fail half of my tests — I lost over one million dollars of product just last month.”

“We can’t extract the oils from a failed batch under the current regulations,” said another grower . “That’s 80% of the reason why flower is so expensive and why there’s constant shortages of it.”

Pennsylvania requires marijuana businesses to retain enormous amounts of high-definition surveillance footage. That can cost $100,000 a year a store.

“In Illinois, you have to keep a record of all your cameras for three months. In Pennsylvania, it’s two years,” according to the president of one multi-state cannabis company. “That’s a $30,000 upgrade just to get that. The amount of storage I need is through the roof.”

Guards must protect all Pennsylvania weed businesses. In other states, security is left to the choice of owners.

“It costs me $250,000 a year just in manpower to guard one store,” said Chris Visco, owner of TerraVida Holistic Centers, a dispensary chain in suburban Philadelphia. “Since we started curbside pickup with COVID, we need security both inside and out. And that has doubled the expense.”

Said one cultivator: “It’s easier to get into a nuclear facility than it is into my grow.”

Another costly requirement: Every dispensary must hire a full-time pharmacist. “Most of the time they’re sitting at a computer, bored out of their heads,” said one dispensary owner.

According to the former Pennsylvania legislator considered to be the father of medical marijuana here, pharmacists were added to the law to win over resistant lawmakers.

“We needed to convince the conservative Republicans that this was really medicine,” said Daylin Leach, a former Democratic state senator from Montgomery and Delaware Counties. “They needed assurance marijuana dispensaries wouldn’t be run by a bunch of hippie guys with goatees. There had to be someone professional on site.”

The state has created an oligopoly. The number of growers has been kept artificially small.

Some states put no limits on the number of growers — Colorado, Oregon, and Oklahoma among them.

According to Leach, Pennsylvania lawmakers wanted to be sure there wasn’t an oversupply. “We didn’t want it to be ubiquitous like in the Wild West where pot was growing and sold everywhere,” he said.

Further limiting supply is that the conflict between anti-marijuana federal law and Pennsylvania’s statute means that weed cannot be shipped across state lines. What’s consumed in Pennsylvania must be grown in Pennsylvania.

Moreover, legislators put a specific ceiling on in-state cultivators, limiting permits to a total of 33.

Yet only 20 of those permittees are actually producing marijuana medicines. While more production would drive down prices, health officials have done little to force laggards to get into gear.

“We have to have more competition,” said Jason Mitchell, a cofounder of Soulful Cannabis, a marijuana-advocacy organization in Media. “There’s nothing we can do because it’s all funneled through a handful of license holders. What’s the incentive for them to compete?”

In an economy of scarcity, it’s hardly surprising profiteering is rampant

A pound of wholesale marijuana grown indoors in Oregon sells to retailers for about $1,600. In Pennsylvania, wholesalers charge $3,700, according to an Inquirer survey.

Still, a former grower who sold his business last year to a multi-state cannabis corporation said the permit fee actually had a “negligible impact.”

In his view, profiteering was driving costs.

“The profitability on the wholesale side is disgusting,” he said. “The cost to build a marijuana facility in Arizona is similar to what it costs to build one in the middle of Pennsylvania. What they’re charging is simply what the market can withstand.”

Ultimately, of course, the patient pays.

“And there is no reason for the price to be that high,” said Peter Marcus, spokesman for Terrapin, a grower with operations in Colorado, Michigan, and central Pennsylvania.

Terrapin was founded by Phish fans and Deadheads. It sells to retailers for at least 20% less than competitors. If a consumer can find the product, Terrapin’s smokable flower can cost as little as $280 an ounce.

Under the 2016 law, a sizable share of marijuana taxes — 15% after expenses — may be tapped to subsidize the cost for poorer patients. Asked when that might take place, agency spokesperson Nate Wardle wrote, “We do not have a time frame at this point.”

Instead, $20 million of the program’s surplus revenue was grabbed by Pennsylvania Gov. Tom Wolf this year to plug the yawning budget hole created by the pandemic, Wardle confirmed last week. That was two-thirds of the program’s money in the bank.

Predictably, many users have turned or returned to the illegal market.

There, street dealers typically price an ounce at $350, undercutting legal prices — by a little.

Still, “there’s no reason cannabis, legal or from the traditional market, should cost more than $65 an ounce,” said Chris Goldstein, a regional spokesman for NORML, the organization that has long lobbied for more lenient marijuana laws.

Nonetheless, one Philadelphia underground dealer was recently selling premium marijuana to consumers for $400 an ounce.